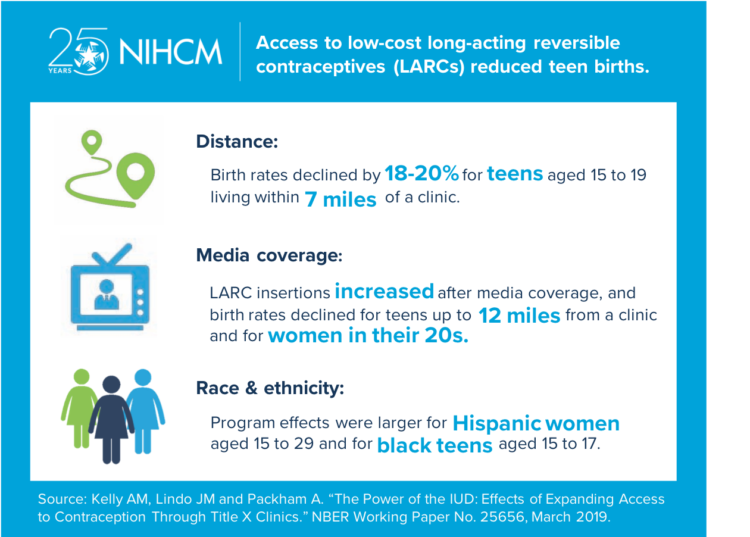 With failure rates of less than one percent, long-acting reversible contraceptives (LARCs) are extremely effective at preventing unintended pregnancies, but they are not widely used due to financial and informational barriers. Since 2009, the Colorado Family Planning Initiative (CFPI) has been providing significant resources to expand the provision of LARCs to low-income clients served in the state’s Title X clinics. A prior evaluation established that this program reduced birth rates to teens living in counties with Title X clinics. This new study incorporates more recent and more detailed data to examine variation in impacts by distance to the clinic, age, race and ethnicity, and increased awareness of the program after extensive media coverage.

Providing free or low-cost access to LARCs through Title X clinics can significantly reduce unintended pregnancies for young women who live near these clinics. Estimates from this analysis suggest there were nearly 6,800 fewer births to women aged 15 to 29 over the life of the program, with the largest impacts seen for teens. Avoiding unintended pregnancies at that early stage of life would likely have significant positive impacts for these women in terms of future educational and economic achievement. Convenient geographic access to these clinics is an important factor in increasing LARC uptake and lowering birth rates. Educational campaigns and other efforts to improve knowledge about LARCs may also help to extend program reach.

The principal analyses in this study used state administrative data on the contraception choices of individual women using Title X clinics, the total number of LARC insertions in clinics, and records of all births in Colorado for periods preceding the start of the CFPI through 2016. All births were assigned to the year of conception, and the population centroid of the zip code of the mother’s residence was used to compute her travel distance to the nearest clinic operating in that year. Difference-in-difference models were used to compare changes in birth rates for women living in treatment-group zip codes closest to Title X clinics to changes for women in more distant control zip codes. Repeated estimation of these models using a rolling five-mile distance window (0-5, 1-6, etc., up to 15-20 miles) relative to a constant control group of zip codes more than 20 miles from a clinic revealed that seven miles was generally the outer limit for observing a program impact. This seven-mile delineation was used as the preferred specification for identifying treatment vs. control zip codes. Models included year and zip code fixed effects and controls for time-varying economic and demographic characteristics.

Kelly AM, Lindo JM and Packham A. “The Power of the IUD: Effects of Expanding Access to Contraception Through Title X Clinics.” NBER Working Paper No. 25656, March 2019. 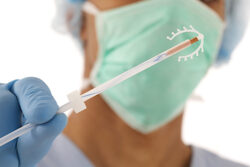 The Effects of Expanded Access to LARCs on Women’s Outcomes