How Common and Costly Are Surprise Bills for Emergency Department Physician Services?

Surprise medical bills are a major source of financial hardship for patients. These bills occur when patients unexpectedly receive care from providers who are outside of their insurance network, despite seeking care from in-network providers. Providers who are out of network often charge well above market rates, leaving patients exposed to potentially large out-of-pocket costs.

This study examined insurance claims from across the nation for privately insured individuals receiving hospital-based ED care between January 2014 and September 2015. Indicators on the claims identified the network participation status of facilities and physicians. The potential out-of-pocket cost for a patient treated by an out-of-network ED physician was computed as the difference between actual charges by the physician and the average commercial reimbursement for in-network services, calculated as 297 percent of the Medicare rate. 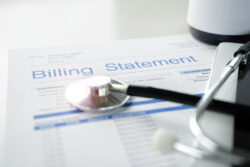