Home > Topics > How Do Providers Respond to Reference Pricing?

How Do Providers Respond to Reference Pricing?

Reference pricing for common, non-emergent procedures whose quality is comparable across providers can be an effective strategy for steering patients to lower-priced providers. This study shows that there may also be supply-side impacts as some providers lower their prices in response to shifting demand. Together, these findings suggest that reference pricing could help to moderate health care spending through two avenues. At the same time, the provider price responses documented here were modest, and few payers have the purchasing power of CalPERS. Significant changes in provider pricing behavior in response to reference pricing are unlikely unless these programs are coordinated across many large employers and purchasers.

This study uses 2009-2013 claims data from a large insurer that began administering a reference pricing program for colonoscopy, cataract surgery, and joint arthroscopy in 2012 for people receiving health benefits through the California Public Employees’ Retirement System (CalPERS). The claims data were used to determine the negotiated prices paid to each provider, and market areas were characterized by the extent to which the local commercially insured population was exposed to the CalPERS reference pricing program. Providers in markets with higher exposure are expected to be more responsive to the program’s incentives. Difference-in-difference modeling was used to estimate the post-reference pricing change in providers’ negotiated prices as a function of market exposure, with non-CalPERS patients insured by this carrier serving as the control group. A similar triple difference model was estimated to differentiate pricing responses based on whether the provider’s baseline price was above or below the reference price threshold. Results are robust across a number of alternative specifications. 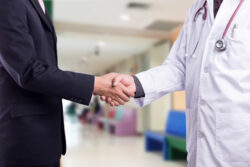 The Impact of Reference Pricing on Hospital-Insurer Bargaining