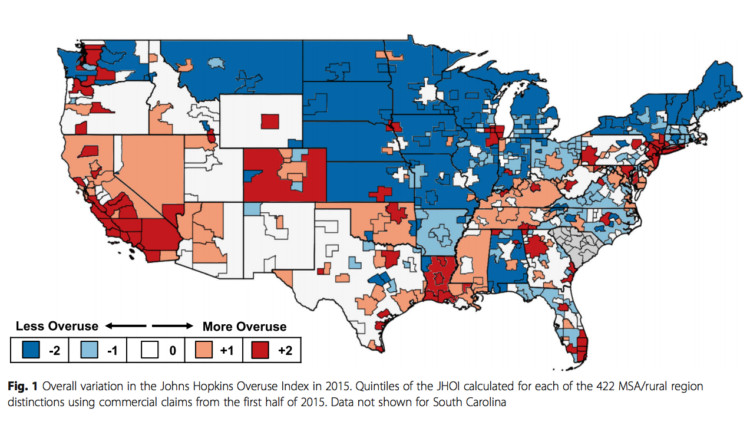 Overuse of medical services occurs when the potential for harm outweighs the potential benefit from the service. Reducing overuse can help us to make wiser use of our limited health care resources and improve patient care quality. While most studies of overuse focus on specific individual procedures, one prior body of research has developed a multi-procedure index of systemic overuse in the Medicare population in order to analyze overuse as a broader phenomenon. This current study extends that work by adapting the Medicare index to the commercially insured adult population and by documenting regional and temporal patterns of systemic overuse for these individuals.

The systemic overuse of health care services by patients with commercial insurance is an enduring regional problem. Rather than trying to curb overuse of specific individual services, addressing structural and system-wide factors that contribute to a “culture of overuse” is likely to have more impact for improving health care value. To that end, future research should investigate the regional characteristics associated with persistently high or low overuse as well as take a closer look at the small number of areas that exhibited meaningful reductions in systemic overuse. Additionally, replicating the overuse index for health systems or networks of clinicians within geographic areas may identify additional targets ripe for intervention.

This study used a large national database of health claims from 2010 to 2015 for working age individuals with employer-sponsored private heath insurance. Nineteen of the 20 procedures included in the original Medicare index could be evaluated with the available data, were relevant to the commercial population, and occurred with sufficient frequency and variation to be included in the updated index. Each claim was assigned to an MSA or statewide rural area based on the location of the patient’s residence. Indicators identifying every time a patient received any of the 19 overused services were used as the dependent variable in a multilevel regression model that included patient characteristics and procedural and regional fixed effects. The regional fixed effects captured each region’s systemic tendency for overuse across the 19 procedures. Standardizing these coefficients as a Z-score produced an index reflecting each region’s overuse relative to the average across all regions. Data from 2010 were used to adapt and validate the index, then regional index values were computed for each half-year interval from 2011 to 2015.

What Health System Characteristics are Associated with Overuse of Health Care in the US?