Home > Topics > Shorter Initial Prescriptions for Opioids: What are the Health and Economic Benefits?

Shorter Initial Prescriptions for Opioids: What are the Health and Economic Benefits? 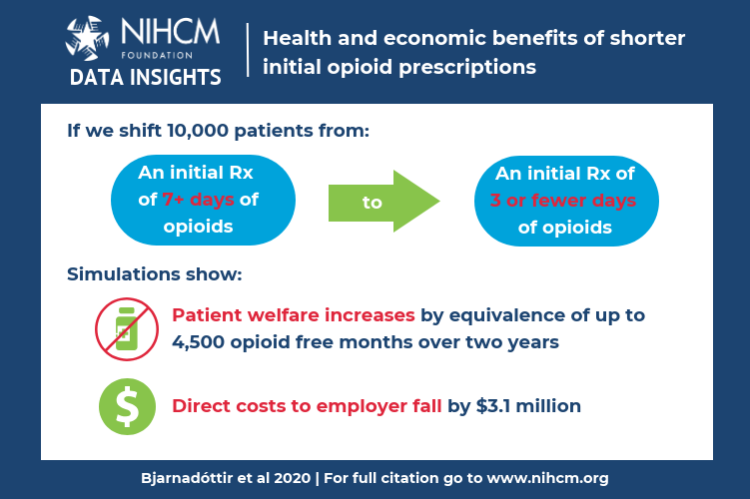 Opioid-naïve patients are more likely to become addicted to opioids if their initial prescription is for a longer duration, and easy access to leftover medication from friends and family members is a common route to opioid abuse for others who were not prescribed the medication. CDC prescribing guidelines for acute pain emphasize the importance of prescribing the minimum effective dose for a period no longer than the expected duration of pain. Despite this emphasis, there is little evidence on the impact of policy changes intended to limit initial access to opioids. This study investigates the patient welfare and economic impacts of moving to shorter initial opioid prescriptions.

These simulations show, for the first time, that reducing the duration of initial opioid prescriptions can significantly improve patient welfare and save money for employers. The gains described here would likely have been much higher if estimated for the older, sicker general population and if the model had accounted for additional adverse effects of chronic opioid use that impose high costs on patients and society, such as drug-associated criminality, suicides and overdoses. Despite these conservative estimates, the modeling shows that initiatives to encourage physicians to use shorter initial opioid prescriptions can be cost effective even if program implementation costs are relatively high. Exploring the effectiveness of potential strategies to modify prescribing behavior is a promising next step in tackling prescription opioid abuse.

Propensity score matching was applied to data from a nationwide sample to construct two large cohorts of service members having at least one opioid prescription between 2011 and 2014. The cohorts differed only in whether the initial prescription was for a long or short duration (more than seven days of opioids vs. three days or less). Patients were followed for up to two years to determine changes between six health states each month: no opioid prescriptions; short, medium, or long periods of opioid supply; opioid prescriptions in any three of the four prior months; or discharged from service. Cohort trajectories were traced over time using a Markov model, and the economic burden to the employer (Army) and patient welfare were tallied for each trajectory. Employer costs reflected medical care and lost productivity and replacement costs when soldiers could not fulfill their duties or were discharged. Patient welfare estimates were based on quality adjusted life years (QALYs), with periods of opioid use assigned lower utility values. A range of model parameters were used to simulate the welfare gains and cost savings of moving 10,000 patients from long- to short-duration initial prescriptions. Program cost effectiveness was gauged by the net program implementation costs per QALY gained. 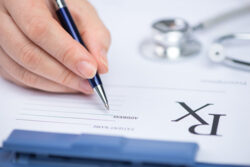