Patient-level efforts to contain health care spending depend on first identifying the most appropriate target patients based on their high spending. Current identification methods typically focus on a single aggregate measure of spending over a short period and have only modest predictive accuracy since spending may increase or decrease sharply over time. This study showcases an innovative data-driven method that examines spending over two years in order to identify groups of patients with distinct long-term spending trajectories and assesses whether future spending increases can be predicted by baseline factors that may be modifiable through timely intervention.

Using trajectory modeling and a relatively simple set of baseline variables readily derived from claims, health plans and care delivery organizations can identify low-spending patients whose costs are expected to escalate and can better target cost-containment interventions to these patients. In addition, by focusing on potentially-modifiable baseline predictors of rising costs, payers and providers gain important levers for early interventions that may prevent cost escalation. In particular, ensuring adequate and coordinated use of office visits and needed medications may improve care and temper future spending increases for these high-risk patients.

This study used 2012-2013 Medicare fee-for-service claims to compute monthly inflation-adjusted health care spending for continuously-eligible aged beneficiaries over two years. Baseline characteristics for this same population were derived from the 2011 claims files and included a mix of 37 sociodemographic variables, comorbidities, and health care use measures. Eleven baseline characteristics were deemed to be potentially modifiable through cost containment or care management interventions. Trajectory modeling was used to identify groups of patients with similar spending patterns over time. Boosted logistic regressions were then used to predict membership in each trajectory group, alternatively using the full set of baseline characteristics and only those seen as potentially modifiable. Multivariable logistic regressions were estimated across four groups of patients with similar baseline spending to identify the modifiable baseline factors that best predicted which patients would become more costly over time. 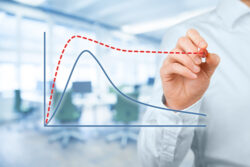