Using several different lines of investigation, this work provides systematic evidence that some nursing homes are inflating the self-reported measures in Medicare’s star rating system. By showing that there is a manageable number of facilities that are likely inflators and identifying key predictors of being an inflator, the findings can help Medicare focus its future audits more strategically and improve its inspection process and ratings system.

This study relies on 2009 to 2013 data for over 1,200 nursing homes in California. The data include the facilities’ star ratings and other characteristics from Medicare files and information on facility finances and resident complaints from other databases maintained by California. The ratings and financial data were used to compute the average daily profit per resident for each star rating level, and ordinal logit models were estimated to assess how the higher profits attainable for higher ratings affect the difference between on-site inspection and overall ratings. Same-year correlations between the inspection and self-reported ratings were examined to identify the degree of internal consistency, and correlations between self-reported ratings in one year and inspection results in the next year were examined to determine if self-reports of high quality are borne out by subsequent inspections. Analysis of variance was used to examine the pattern of complaints for facilities with the same inspection results but different overall ratings and for facilities with the same overall rating but different inspection results. To quantify the likely extent of rating inflation, a predictive model was estimated for the subsample of nursing homes conservatively identified as showing no evidence of rating inflation, and those model parameters were used to predict the highest possible rating for all remaining study facilities. Those with an actual overall rating above their maximum predicted rating were tagged as likely ratings inflators. Variable importance analysis was used to identify characteristics distinguishing facilities that are likely ratings inflators. 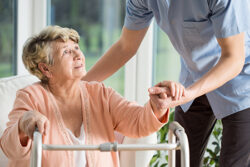