Does Integrated Case Management Reduce Spending in Medicaid by Changing the Way Patients Use Health Care?

Many state Medicaid agencies are adopting integrated case management (ICM) as a way to address the diverse medical, social and behavioral health challenges of high-need patients. As the ACA Medicaid expansions newly extend Medicaid coverage to nonelderly adults, it is important to understand how ICM affects health care service use and spending by this population and to identify ICM models that yield the greatest benefits. This study examined the impact of two different ICM models implemented during the 2009-2013 study period; the first model was largely standardized and automated while the second was much more patient-centered and interactive.

Study participants were nonpregnant, nonederly adults served by the largest Medicaid HMO operating in Virginia. ICM candidates were identified based on their patterns of service use and spending and by referrals from providers, the Medicaid agency or patients themselves. Participation in the program was voluntary. The standardized ICM model used initially by the HMO was changed to the more patient-centered model midway through the study period.

Claims from up to one year prior to ICM identification were used to stratify participants into high- and lower-risk groups, and program data on the patient's number of successful program contacts relative to time enrolled in the program were used to quantify intensity of ICM participation. Linear regression models examined pre- and post-program changes in health care use and spending as a function of the type and intensity of ICM program involvement, patient demographics including severity risk score and indicators of high use and/or spending in the pre-ICM period, and fixed effects for individual case managers. 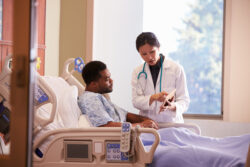