Hospital Mergers and the Unrealized Promise of Better Quality 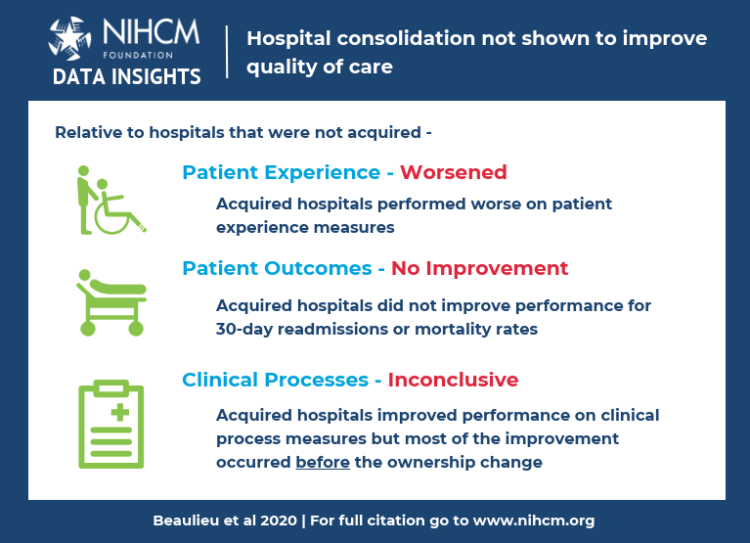 Across the country, mergers and acquisitions in the hospital industry are reducing competition between local rival hospitals and conferring additional clout to regional and national hospital systems as these systems grow in size and dominance. Strong empirical evidence shows this increased market power enables hospitals to negotiate higher prices. While proponents of hospital mergers often assert that consolidation can also improve quality of care, the limited evidence on this point is mixed and derived primarily from studies examining a narrow set of quality measures for specific acquisitions and for merger activity occurring two decades ago. This study is the first systematic assessment of a broader range of quality impacts on hospitals acquired in a comprehensive set of recent mergers. Its findings belie the claims that hospital consolidation improves quality of care.

It is well established that hospital mergers bring higher prices for patient care, but many hospital systems argue that mergers can also improve quality. Findings from this study run contrary to that claim for the four dimensions of quality examined. On average, across all acquired hospitals, there was no evidence that clinical processes or patient outcomes improved after an ownership change, but results point to modestly worsening quality from the patient experience perspective. The deterioration in the patient experience measures may be of particular concern because these measures reflect aspects of quality that matter to patients when receiving care. In the face of ongoing hospital market consolidation and accompanying price increases, consumers deserve to experience measurable and meaningful quality improvements, extending even beyond the dimensions studied here. Merging hospitals must be held more accountable for achieving, not just promising, such benefits.

This study used difference-in-differences modeling to compare changes in the quality performance of 246 short-term acute care hospitals that were acquired between 2009 and 2013 with concurrent changes for 1,986 control hospitals not experiencing an ownership change. Performance for four different quality indicators was assessed for each hospital for several years before and after the acquisition period. Two composite measures of quality were derived from the Medicare Hospital Compare data system: the first was based on five measures of patient-reported experiences during hospital stays and the second reflected hospital performance on seven indicators of clinical processes of care such as timely use of appropriate medications for specific types of patients. Medicare claims were used to compute risk-adjusted all-cause 30-day readmission and mortality rates.

Beaulieu ND, Dafny LS, Landon BE, Dalton JB, Kuye I, and McWilliams JM. “Changes in Quality of Care after Hospital Mergers and Acquisitions.” The New England Journal of Medicine, 328(1):51-9. January 2, 2020.