Check Out Our Updated Infographic

This series of interactive infographics depict how the crisis caused by opioid abuse and overdose deaths has not only grown in magnitude since 2000, but has also changed in character.

As the number of opioid overdose deaths grew eight-fold between 2000 and 2018 – reaching 45,865 deaths in 2018 – the minutes between deaths fell correspondingly. By 2018 one person was dying of an opioid overdose every 11.5 minutes.

Over this period, the crisis evolved in three well-documented waves. Initially, overdose deaths were predominantly linked to common prescription opioids, such as oxycodone and hydrocodone. By 2011, however, heroin was increasingly involved in overdose deaths, and beginning in 2014, there was an explosion in the number of deaths involving synthetic opioids such as fentanyl. Despite a leveling off in deaths involving prescription opioids and heroin in the since 2016, deaths involving synthetic opioids have continued to rise. Because a single death may involve multiple types of opioids, summing across the three categories in any year will overstate the total number of deaths in that year.

These waves are also apparent when looking at temporal changes in the share of opioid deaths in a given year that involved each substance. At the beginning of the period, 65 percent of all opioid overdose deaths involved common prescription pain killers, but this figure had declined to 33 percent by 2018. Deaths involving heroin began playing a larger role in overdose deaths around 2011, before tailing off somewhat by 2018, only to be supplanted by the very significant rise in the involvement of synthetic opioids. By 2018, 68 percent of all opioid deaths involved a synthetic product. Again, since multiple substances may be involved in a single death, the percentages reflecting the share of total deaths involving each substance will sum to more than 100 percent in a given year.

In the panel above, we present unduplicated counts of the number of deaths involving specific combinations of prescription opioids, heroin and synthetic opioids. It is apparent that a growing share of opioid deaths involve two or even all three of these substances, particularly in recent years.

For example, in the second tab, focusing on common prescription opioids, we see a leveling off and then a decline in the number of deaths attributable solely to this type of opioid (the dark blue segments), as well as the increasing involvement of heroin and/or synthetic opioids used in combination with prescription drugs.

Finally, data presented in the fourth tab, show not only the rising importance of synthetics as the sole cause of opioid overdoses, but how common it has become for overdose deaths to involve synthetic products in combination with heroin and/or prescription opioids.

Coincident with the rise of heroin and synthetic opioids, both of which have much less predictable potency and purity than prescription pain killers, there has been a rapid increase in the number and share of opioid deaths ruled accidental. By 2018, 91 percent of all opioid overdose deaths were deemed to be accidental compared to 77 percent in 2000.

The opioid crisis has always touched all age groups, but in the early years when opioid abuse was primarily associated with prescription pain medications, the crisis was initially felt most acutely by adults in their 40s. Beginning around 2007 overdose deaths began to affect all age groups more equally. By the end of the period, when heroin and synthetics had come to dominate the crisis, younger adults aged 25 to 40 were the hardest hit by overdose deaths.

Data on opioid overdose deaths were derived from the multiple cause of death files of the Wide-ranging Online Data for Epidemiologic Research (WONDER) data system maintained by the Centers for Disease Control and Prevention (CDC).

Deaths were identified as due to an opioid overdose if the ICD-10 code for the underlying cause of death was X40-X44 (accidental poisoning), X60-X64 (intentional self-poisoning) or Y10-14 (poisoning of undetermined intent) and if any of the multiple cause of death codes indicated that the type of substance involved in the poisoning was T40.1 (heroin), T40.2 (natural and semi-synthetic opioids), T40.3 (methadone) or T40.4 (synthetic opioids other than methadone). Because a single death may involve multiple substances, summing across the number of deaths involving each substance will overestimate the number of opioid-related overdoses. Following the classification scheme adopted by the CDC, methadone and natural and semi-synthetic opioids (e.g., oxycodone and hydrocodone) were grouped into a single category encompassing commonly prescribed opioids. Synthetic opioids other than methadone include substances such as tramadol and fentanyl (both pharmaceutically manufactured and illicitly manufactured). A small number of opioid deaths that were the result of homicide (underlying cause of death X85) were excluded from the analyses. 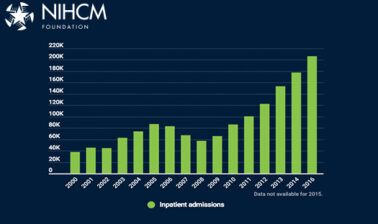 Charting the Stimulant Overdose Crisis & the Influence of Fentanyl

Incarceration is a Public Health Issue

Health During and After Incarceration